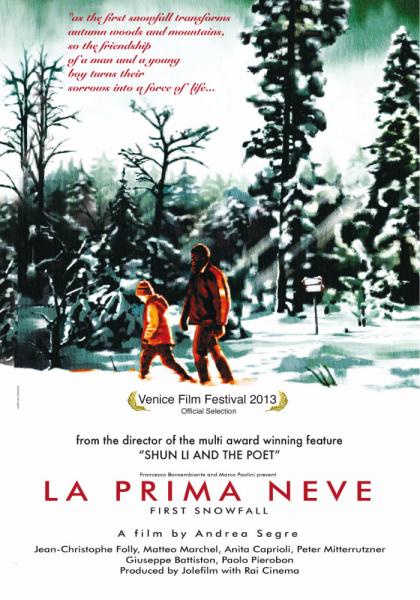 The first snow is what everyone in the valley waits for. It will change all colors, all forms, all contours. But Dani has never seen the snow. Dani was born in Togo and arrived in Italy as a refugee from the war in Libya. He was taken in by a refugee home in Pergine,a small village in the Alpine mountains of Trentino, at the foot of the Mocheni Valley. He has a one-year-old daughter, but he is unable to care for her. Something is blocking him. A profound sorrow.  Dani is offered a job in the workshop of Pietro, an elderly carpenter and beekeeper who lives on a mountain farmstead with his daughter-in-law Elisa and his grandson Michele, a ten-year-old whose restlessness immediately speaks to Dani. Michele’s father died a short time ago, leaving a great void in the boy’s life. His relationship with his mother is marked by conflict and tension and he looks to his uncle Fabio for support and friendship instead. Sooner or later the snow will arrive, and there is not much time to repair the hives and gather wood. A short and necessary time that allows sorrows and silences to become opportunities for them to get to know and understand each other. A time for letting the leaves, the trees and the woods prepare for change. In that time and those woods, before the snow, Dani and Michele will learn how to listen each other.